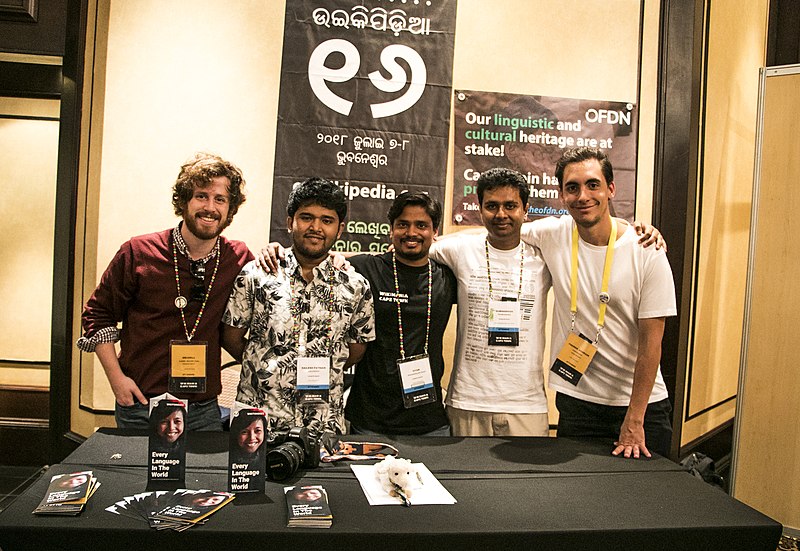 Can you imagine a place other than New York City or Papua New Guinea where you can find people speaking hundreds of languages even in a small place? Well, it would be Wikimania, the annual conference of Wikipedia and other Wikimedia projects.

This year’s Wikimania that was in Cape Town, South Africa, was not only focused around diversity, but also helped Wikimedia affiliate WhoseKnowledge? organize a new kind of conference called the Decolonizing the Internet (DTI) which helped many to rethink about centering the knowledge of marginalized communities on the Internet. Thanks to Wikimedia Foundation for providing scholarship to Jnanaranjan, Sailesh and Subhashish based on their individual contribution to the Wikimedia movement so that they could participate at Wikimania this year.  Sailesh and Subhashish participated in DTI and brought back many valuable learning on amplifying the voice of marginalized people and topics.

Like last year, O Foundation (OFDN) joined forces with the Odia Wikimedians User Group and Wikitongues to host a booth at the Wikimedia community village. This booth helped engage with many visitors and interview many of them both for Wikitongues and OpenSpeaks. These video interviews of people speaking in their native languages — one of which was shot at the Cape Town airport — will soon go live on YouTube as well as Wikimedia Commons.

Sailesh, Jnanaranjan and Subhashish divided their time to participate and speak in many sessions in both the conferences.  Sailesh, with his hat of Community Advocate at the Centre for Internet Society’s Access to Knowledge (CIS-A2K), presented about the collaboration with the government of the Indian state of Odisha. As an outcome of a long-time dialog with the government done by the Odia Wikimedians User Group, CIS-A2K and Wikimedia Foundation, the government released content (mostly pictures, videos and text) owned by them of as many as 7 websites and 8 social media accounts under a CC-BY 4.0 license. Odisha became arguably the first ever provincial government in India to make such a policy-level move.

Jnanaranjan shared his experience as an Odia Wikipedian about the implementation of the Project Tiger editathon under the ambit of “Working towards Growing Local Language Content on Wikipedia (GLOW)” that supported Wikimedians with laptops and Internet connectivity was live-broadcast on Facebook Live from the Odia Wikipedia channel.

We met Daniel Bogre Udell and Freddie Andrade, our friends from Wikitongues and took our collaboration to a new level by recording interviews with many native language speakers both for OpenSpeaks and Wikitongues.  We broadcast live Daniel’s presentation on Wikitongue’s work on documenting languages.

We have been busy after coming back — from wrapping up our documentaries in some of the endangered languages of South Asia with support from National Geographic, to building input and other tools for marginalized languages (thanks to Anasuya Sengupta and Shuttleworth Foundation for your support on this), to helping relaunch the Creative Commons India community.